The Deputy Governor of the Province of Upper Austria, Christine Haberlander, and the Managing Director of pro mente, Gernot Koren, congratulate the “Institut Suchtprävention” on the successful model.
“Addiction prevention is a very complex field. In addition to the special characteristics of substances, individual and structural causes must be taken into account in the development of addiction. You don’t learn all this in one week. We are fortunate that the majority of our colleagues have been with us for more than a decade, some for 25 years. This has enabled us to achieve a high level of professional reputation in the relevant settings as well as among national and international experts. Whoever orders a service from us gets high quality,” explains Christoph Lagemann, head of the Institute for Addiction Prevention at pro mente OÖ.
For more Information: https://www.pmooe.at/archiv/09-12-2019-25-jahre-institut-suchtprävention/

At the beginning of September 2019 the final conference of the EU project “Localize It” took place in Figueira da Foz, Portugal with 30 prevention experts/project partners from eleven European countries. In two and a half years the project partners accompanied and advised 22 municipalities in the development and implementation of a local alcohol strategy – Figueira da Foz is one of them.

At the final conference, the partners reported on their experiences, evaluation results and a manual developed within the framework of the project was presented. Furthermore, possibilities for the sustainable anchoring of the Local Alcohol Strategy as well as for the further dissemination of the approach to other European municipalities were collected.

The manual describes in detail the process of the Local Alcohol Strategy, gives practical advice and contains field reports from participating municipalities, from which other municipalities and professionals can benefit. The manual is available electronically in nine languages. You can download it on the project website (www.localize-it.eu) or under https://www.euronetprev.org/projects/localize-it/publications/.

Localize it! is on the home stretch. The final conference will take place in Portugal in September. Besides the conclusion of the project, the results of the accompanying evaluation of the UKE Hamburg will be presented. The manual developed within the framework of the project will also be ready by then. The event is only open to project partners and other Project participants, as it also deals with organisational issues, stumbling blocks and milestones of the project as well as further dissemination opportunities in Europe.

Of course the results of Localize it! will also be published on the euro net website and the manual will be available.

During the last network conference in Deventer (NL) euro net elected the Presidium. President Hans Keizer, Vice-President Gaby Bruchmann and Secretary Carlo Baeten were confirmed. Stig Tore Bogstrand is now in charge of the network’s finances. The Presidium has been extended to include an observer, Alena Kopanyiova.

In addition the cornerstones of a new common European Union project were compiled. With “Make the difference” euro net focuses on the promotion of cooperation between youth and addiction services with regard to children from addicted families.

The next euro net network conference takes place in Deventer (NL) from 01th to 3rd May 2019. Main topic will be the exchange and discussion about support for children, living in families with addiction issues. The networks plans to develop a new common project in this field. In the opinion of the members, the necessary cooperation between addiction and youth services is not without problems.

For this reason, a possible project should focus on binding agreements between the help systems.

Read more about Localize it: www.localize-it.eu

On June 26, 2018, the closing ceremony of the sixth PLUS course took place at the institute for addiction prevention in Linz. In total 55 AHS and NMS teachers finished the additional training on the subject of violence and addiction prevention. The final certificates were awarded by Mag. Ingrid Rabeder-Fink. 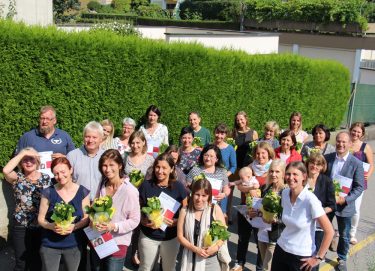 The participants of the seminar gain a basic knowledge about trauma, different reactions to pressure and how people can deal with it. It also discusses what drug consumption plays a role in this context.

Two speakers (emergency psychologists and experts from forum addiction) elaborate in groups up to 20 participants the above-mentioned topics with interactive methods to ease the contact to the persons admitted to the centres.

In the frame of our EU-project “Click for Support – REALized” the web-based intervention “Mind Your Trip” is launched online and in Apple- and Android app stores. The web-based intervention will be available in 10 languages (DE, FR, FI, GR, LV, LU, NL, PT, SI, SK) and focuses on young consumers of New Psychoactive Substances (also known as “designer drugs”, “synthetic drugs or “legal highs”) between 14 and 25 years.

Mind Your Trip provides information, a self-assessment test and three intervention modules: “Brief intervention”, “Safer Use” and “Quit or Reduce”. The intervention is anonymous and free-of-charge, and is professionally conducted by trained prevention experts. The programme will be available until at least October 2018 and will be operated by the 13 euro net project partner organisations.

The results of the evaluation of Mind Your Trip will be presented at the projects’ Final Conference in Münster, Germany in November 2018.

Tarragona will host on April 17 and 18 this conference that aims to publicize Planet Youth: a community program for drug prevention started in Iceland in 1998 that has shown excellent results in the decline of alcohol, cannabis and tobacco consumption among the teenagers.

Planet Youth is a program based on scientific evidence, universal and community prevention that has drastically reduced the consumption of drugs in the youth population through political commitment and the continued commitment to create healthy and quality environments for all citizens.

This Icelandic prevention model is based on three pillars of success: