Final Conference Localize It! in Portugal

On 4-5 September the final conference of the EU project Localize It took place in Figueira da Foz, Portugal with 30 prevention experts/project partners from eleven European countries. In two and a half years the project partners accompanied and advised 22 municipalities in the development and implementation of a local alcohol strategy - Figueira da Foz is one of them.

At the final conference, the partners reported on their experiences, evaluation results and a manual developed within the framework of the project was presented. Furthermore, possibilities for the sustainable anchoring of the Local Alcohol Strategy as well as for the further dissemination of the approach to other European municipalities were collected. The manual describes in detail the process of the Local Alcohol Strategy, gives practical advice and contains field reports from participating municipalities, from which other municipalities and professionals can benefit. The manual will be available electronically in nine languages by the end of September.

Second Workshop –action plans and how to get from plan to action? 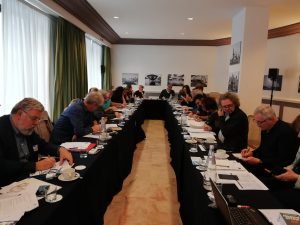 The Localize It-project focuses on different approaches for alcohol prevention for young people in the 22 participating municipalities. One of them is nightlife, festivals, retail and gastronomy.

From June 4th to 6th, a workshop for this particular setting has been organized by the Portuguese partners Irefrea in Coimbra, Portugal, with participants from Belgium, Luxembourg, Austria, Italy, Czech Republic, Portugal and Slovakia. 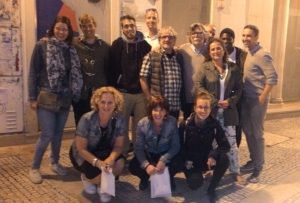 On 13-14th March 2018, more than 60 European prevention experts from 18 countries have met in Muenster, Germany, to exchange and discuss good practices for alcohol prevention for young people. Among the participants were also representatives of municipalities involved in the Localize It! project, coordinators of other EU-funded projects as well as representatives of DG Sante, Chafea and the German Ministry of Health.

Localize It! in Austria

The Institut Suchtprävention, pro mente Oberösterreich, is one of 11 project partners. The municipalities Linz and Bad Ischl are participating in Localize It!

In January, the Institut Suchtprävention has published a press release about their two Localize It-locations (You can find the original version in German here.):

“A good wine for dinner, a cool beer while talking to the neighbor, a glass of prosecco at a celebration: Alcohol is part of our culture and for most people in Austria, alcohol is associated with indulgence and celebration. However, some people develop a high-risk or problematic consumption pattern which can have far-reaching consequences, for the consumers themselves but also for their social surrounding and the society.

Within the Localize It! project, a European Expert Meeting will take place in Muenster, Germanyfrom 13-14 March 2018.

Several speakers will give an insight on local alcohol strategies from different perspectives, good practices will be shared and intermediate results from the poject will be presented by the consortium. A market of opportunities for structural and indiviual alcohol prevention measures for young people will round up the conference.

2017 is almost over and that’s a good time to look back at what we did so far. In the newsletter you can read information about the project and some experiences of project partners. Also we look forward to the challenges in 2018 and 2019. Here you can find the newsletter

Localize It! – European conference – Save the date

Within the Localize It! project, a European conference will take place in Muenster, Germany, on 13-14 March 2018.

During the conference , good and best practices for alcohol prevention for young people will be exchanged and discussed. Further, the concept of the local alcohol strategy will be introduced and partners will present intermediate results such as the results of the Rapid Assessment and Response (RAR) and the current state of the cooperation with the selected municipalities.

Invitations to the conference will be sent to prevention experts from all EU member states in due time.

After the kickoff in Luxembourg the project partners started with their local research and tasks.

The project “Localize It! – local strategies for reducing underage and heavy episodic drinking” has been approved by the European Commission.